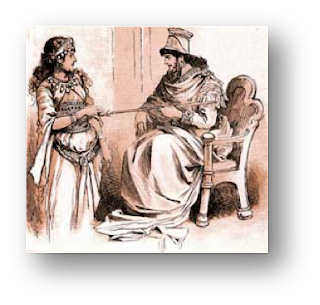 Esther is a great story of redemption - one that comes about in a great crisis forced upon Esther. But, we often re-tell it as a Christian fairy-tale - one that equates her beauty with goodness (just like all fairy-tales seem to do).

Of the course, the storyline framework of "pretty girl" equals the "good girl" and star of the story has all kinds of problems, especially if you think about the consequences on young girls. The truth is that Esther enters (some may read it as she is coerced into entering) a contest that is not about simply being the prettiest or with the best homemaking skills. The contest centers on a series of comparative sexual performances for the Persian monarch.

Esther lives months within the Royal Harem with no one seemingly knowing she's Jewish. As the book of Daniel makes clear, this would have to mean she is making no effort to maintain the dietary laws of Moses. The contest involves spending a night with the King - and the one "who pleases the King" (yep, that's what the text says) the most wins. Esther does not win by having devotions with the King or just by being pretty. Also, when news comes to her of the impending assault on the Jewish people, her own un-coerced response is hardly commendable. It's close to, "Gee, that's a tough break for you guys. But, there's nothing I'm going to do about it."

Mordecai's response to Esther's less-than-desired reaction is clearly both a threat (don't think people won't quickly find out who and what you really are, little Miss Jewish Princess) and a challenge (it just may be that you've been brought to this place, this position, and this moment for this very purpose). And it is then, and perhaps only then, that we see the remarkable woman emerging from all too human girl.

Like stories about real people, and not children's fairy tales, Esther begins with a the real person. A young woman who may be beautiful, but is also self-serving, skilled at whatever sexual skills Persian monarchs expected, and certainly not showing any signs of tremendous personal religious convictions. But, pushed by events she hardly expected or wanted, she comes to a time of crisis that changes her, as surely as it results in the protection of the Jewish people. Her last words before preparing to enter into the King's court, "And, if I perish... Well, then I perish" are a seminal example of what people used to mean by the word "courage."