Racism and Dressing Up for Church 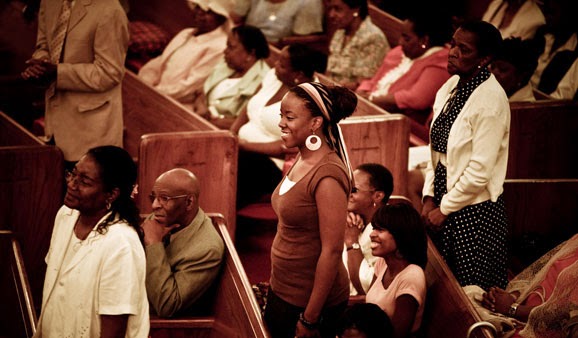 As the title suggests, this post will explore dressing up for Sunday worship and racism. Racism, I need to acknowledge at the outset, may not be exactly the right word, particularly if someone is thinking about a consciously malicious way of looking at people based on ethnicity or skin color. Myopic cultural provincialism would actually have been a better description. But, then again, would you have read the post even this far if I stuck those words in the title? While it may start to sound like I’m writing about proper clothing for Sunday worship, bear with me to the end and you’ll find the point I want to make is considerably more important than clothing for church.

In an undergraduate course on Christian worship, I was concluding the unit examining the history and traditions of African-American worship in the United States. Since the students had seen the videos and pictures, my question was, “So, why do predominately black churches dress up for Sunday worship?”


Although my students were used to going to Sunday worship wearing jeans and other casual dress, it had been obvious in the class materials this was not common in black churches. Most of the men wore ties and some were in suits. Women went to church wearing nice dresses and, surprisingly in this day and age, a number wore stylish hats.

Several suggestions were made, all of them plausible. Maybe dressing up is a carry-over from the era of slavery? Or, maybe it’s the only chance many people have to really dress up? Or, could it be that black culture just generally puts a higher value on personal appearance than the majority white culture?

I admitted the direction I was going meant this was a trick question. But, they did have some good ideas. Just not the one I wanted to hear. To help them along, then, I added a new twist: “Now, I want to point out to you that traditional Hispanic Sunday worship is also marked by men and women dressing up for church. So, knowing that is also true, what would that do to your responses?”

This was not new information. A number of them had worshipped with Latino believers both here and outside the United States. Was there some common denominator they had not seen before that would help explain both African-American and Hispanic Christians dressing up for Sunday church? It wasn’t related to their denomination. Most African-American worshipers were Protestants, while most Latino worshipers were Roman Catholic.

Well, both groups had suffered numerous examples of racial discrimination. Maybe the answer would be down that road. Or, it could simply be two separate groups had evolved wholly separate causes for the same behavior of dressing up for worship.

Let me muddy the water up a little more. In my own family roots in rural Appalachia, the largely Scots-Irish population also tends to dress up for Sunday worship. That makes the idea it is anything to do with racial discrimination unlikely.

Certainly Appalachian, Hispanic, and African-American cultures have higher levels of poverty than most of our white students. Poor Christians in third-world countries also tend to dress up for worship. It might be that there’s a link between poverty and dressing up for worship. That is an intriguing thought. But, it does not provide a viable explanation, since in the more affluent areas of London and Boston and Bar Harbor, very wealthy believers also dress up for Sunday worship.

If you’re tracking with me, you’ve already guessed the nature of the trick hiding inside the question, “So, why do people in historic black churches typically dress up for Sunday worship?”

The trick is realizing the question reflects the distorted assumption that dressing up for worship, since it is not our current custom, must be a behavior that is “caused” by something. Dressing up for worship is not normal. In fact, it is simply not our (predominately white, middle class, English speaking, largely suburban, conservative, Protestant, evangelical, American Christian) normal. The insidious nature of our racial and cultural blinders rests in the assumption accepted without even realizing it that we define normal.

The question would be roughly like asking a group of American students standing in downtown Glasgow to explain how it is so many people around them insist on talking with Scottish accents. This cultural provincialism is so entirely distorted because, if you are standing in downtown Glasgow and don’t speak English like a Scot, then it is you, not the people around you, that have “the accent.”

The truth is that the tradition of dressing so casual for worship that jeans and tee-shirts are quite acceptable is, for a two-thousand year old institution, a new tradition. It is also a tradition practiced on earth by only a small minority of Christians on Sunday morning. Don’t focus on whether or not it is a good tradition. The more important point is to recognize how we so easily presume our normal is the normal.

One final example of a similar question, and one touches more directly on the racism nerve: “So, where do black people come from?”

The question is framed with an assumption that Adam and Eve were white. Noah and his family were white. It’s easy to see why that’s the assumption. It’s in all the paintings. Noah sometimes even looks a good deal like an Australian actor.

“Where do black people come from?” assumes we (writing as a white Scot-Irish American) as light-skinned humanity are the standard-issue kind. The other variations must have arrived later.* In so easily, so thoughtlessly, and so mindlessly presuming our normal is everyone’s normal, we unwittingly propagate a mindset that makes every notion that Jesus is “the white man’s religion” sound pretty much on target.

Not all of our distortions are so clearly harmful. But, they are still distortions. Normal worship must have twenty-five minutes of music. Normal worship has a preacher who gives a thirty-minute sermon. It’s normal to look out and see nearly every face in a congregation the same color. It’s normal that everyone in church votes for the same candidates. None of this is remotely normal. It is simply our normal. Nothing wrong with that, unless we never open our eyes enough to realize that we are just a part, and a very small part, of the marvelous multi-colored multi-lingual picture of the people of God spread across this planet and reaching back a hundred generations through kingdoms and empires long vanished and largely forgotten.

My students were not dumb for not realizing dressing up for church is so widely done over so many centuries that asking why a particular group dresses up for church is a little absurd. They were just normal enough to presume their normal was the normal.

Hopefully, they will think about this the next time they meet someone dressed differently than them in church or see a painting that depicts Adam and Eve as white people. As to the Australian Noah, we’ll leave that one for others to discuss.

*The assumption by some within an evolutionary framework that white races are the ones that arose later is, if anything, even more racist. If human evolution is presumed as a kind of progress, then later races are improvements on earlier races. Not exactly the same issue as the one addressed in this post, but a viewpoint that needs to be buried along with the swastikas that so openly reflected such arrogant hubris and racism.

"Myopic cultural provincialism would actually have been a better description. But, then again, would you have read the post even this far if I stuck those words in the title?"

After my pulse rate returned to normal.

This is a good report on a good experiment. I suspect your observation in the matter of worship tradition applies to many other areas of American evangelical faith and practice, even to our implicit hermeneutics.

Thanks for posting this.

You always know how to make me smile. And, yes, I think it is critical to hermeneutics. As I said once, Alexander Campbell looked down past 18 centuries of church history to see the face of Jesus. And, behold, He was a Protestant.

Our culture wraps itself so tightly around us we think its distortions are clarity of sight.

Great post. I had no idea of my own cultural presuppositions until I married someone from another country and then moved to Texas, which sometimes may as well be another country. But even having those kinds of life experiences, we still need to be taught to think differently or we'll miss it.

I think I grasp your point. Although, when I use the term dressing up, my reference point is that people are wearing clothes that are "nicer" than their every day outfits.

I will say, though, that it has been my personal observation that blacks who dress up tend to look more and better dressed up than whites who dress up for church. Their clothes look snazzier.

Well we just like to look smart.Our everyday clothes are old and not very tidy.We have always dressed up so dont know about these previous comments.We have to keep our nice clothes from getting messy then they last longer .if you wore your suit to garden it would soon get messsy.Years ago not much money was about so that is another reason.