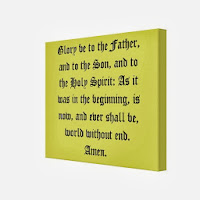 Try as I might, it's hard not to be a teacher.  So, with apologies for giving way to the pedantic, I'd like to help explain a perplexing phrase used by many churches in one of the oldest praise songs still is wide use today.

While some evangelicals may not know it, a large number of believers regularly sing a doxology called the Gloria Patri:

Glory be to the Father,
And to the Son,
And to the Holy Ghost.
As it was in the beginning,
Is now and ever shall be,
World without end.
Amen.  Amen.
(Traditional musical setting by Cynthia Clawson)

The problem comes from the second to the last line.


World without end certainly sounds like it is describing maybe being in heaven, or maybe, just a very long period of time on the earth (as Ken Follett uses it in his novel with the same title).  Follett uses "World Without End" to describe the stable world of late Medieval Europe.  But, like many people, he is totally misunderstanding the phrase.  The is not surprising, since  the traditional "world without end" translation of et in saecula saeculorum is confusing at best, and misleading at worst.

Trying to figure out the meaning by looking at the rest of  the lyrics doesn't help much. Translated literally, what the original Latin actually says would be closer to "in world of worlds."  The word secular, in fact, is based on the Latin saecula.  But, even the more literal translation still leaves many unclear about what the phrase means.

That same alternate sense  is also true of the Latin word saecula.  Saecula saeculorum can be translated as, "age of ages."  Some might  already see where this is going, because they remember some of the ways that phrase is used in the New Testament.   In fact, if  you sang the Gloria Patri in a Greek orthodox church, you would end the song by singing,  "Kαὶ εἰς τοὺς αἰῶνας τῶν αἰώνων."  This is exactly the same phrase found in Greek text of Galatians 1:5; Philippians 4:20; Revelation 1:18, 4:9, 5:13, 7:12 and in many other passages.  If you look and don't see "ages of ages," that's because it is usually translated "forever and ever."

So,  the song is actually a praise of the Triune nature of God.

The same theme is found in other songs.  "Age to age He stands.  And time is in His hands.  Beginning and the end.  The Godhead, Three in One.  Father, Spirit, Son.  The Lion and the Lamb." – Chris Tomlin in "How Great is Our God"

But, most contemporary praise music, just like most of revival gospel songs written over the past 150 years, avoid references to the Trinity.  When it comes a  complex doctrine, even one as important as the Trinity, the normal approach of most church music for the past century has been avoidance. Music is supposed to make us feel, not think.   Doctrines are for preachers, not song writers.  It was not always so.  The ancient Gloria Patri was calling upon the church to praise the Trinity.  Glory is given because of the nature of God as Father, Son, and Spirit, affirming such has always been and will forever be the nature of God.

Some of the newer music coming out lately is becoming more theologically grounded. Here's a great song that I didn't realize was purposely trinitarian until I sat down to learn it.