Banning Prostitution in the Church 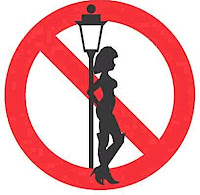 A man once mistook me for a hooker.  I know what you're thinking.  No, I was not dressed in drag and I was as surprised and ultimately pretty offended by the mistake.  Perhaps more surprisingly, it all happened over the telephone.

There I was, peacefully sitting in my office grading exams when the phone rang.  The man introduced himself.  He was an elder at a rather large and very well-known church.  The conversation began with small talk but quickly got around to the exchange of money for services.

"So," he asked after explaining the purpose of his call, "Are you ready to come up here and be our Pastor?"
I replied that I was content where I was (I was serving on the faculty of Kentucky Christian University).  I also knew the offer was being tendered pretty much on the sole basis of several people in the leadership having heard me speak somewhere.  As far as I know, I'd never had a personal conversation with any of them about anything.  Preaching is one of my strengths.  But, I also know I have a boatload of weaknesses.  Offering the leadership of a church to someone solely on the basis of hearing them preach a sermon or two is as dumb as voting for a President based on who looks best in a televised debate.
"We think you need to reconsider."
I was, to be honest, flattered.  If I felt God prodding me to move, I might have been at least willing to enter into a longer dialogue.  I didn't so I didn't.
"Thank you for the kind offer, but I'm really not interested."
"Whatever you're making at that school, we'll at least double it."
This is what might be called closing the sale.  Like all such exchanges, at least one of the parties thinks it always comes down to negotiating the price.
I guess maybe I was having a grumpy day or maybe it just hit me wrong.  Instead of being attracted or even flattered, I was embarrassed and a little upset.
"Listen, I may be many things I wish I was not, but I'm not up for sale to the highest bidder."
The conversation ended awkwardly.  I never heard from the church again.  I told Linda about the conversation.  But, I've waited a number of years before putting it all into print.  And, no, I will not provide any hints or clues about the identity of the elder or the church.
As I muddled over the conversation over the next few days, I found myself increasingly offended by the whole idea.  I was offended that the kind of conversation I had over the phone is not that rare.  Most of all, I was offended that my own vocation, time after time, has demonstrated that we can and often want to be, bought by high bidders.
Shepherd Stealing
While nineteenth century churches constantly struggled against sheep stealing (getting people in some nearby church to change membership into your church), the modern church has replaced that with shepherd stealing.  It is so widespread and tacitly accepted that it is often practiced right out in the open, like legalized prostitution.
"You like our worship pastor?" one excited young preacher once asked me at a CIY gathering, "We stole him from Second Baptist Church in Dallas."  I smiled and nodded, but cringed on the inside.  I know I should have said how I felt.  But, like you, I often compromise integrity in the name of avoiding awkward moments.
On the receiving end of this blatantly capitalist approach to ministry are the small and medium churches that have come to assume they are a stepping stone up a ladder of ministerial success.  "He's a great preacher.  So, we know we won't be able to hang on to him for long…"
We have come to find it acceptable that some churches pay their Senior Pastor (or Lead Pastor or Grand Imperial Pastor or whatever) more than four times what a full time secretary at the same church is paid ("Oh no, we're not sexist.  We have woman serving Communion.").  The only thing we lack to fully match the model are stock options and golden parachutes.
A Biblical Concept Tainted
Paid church leaders is a biblical concept.  It's good to ministers and staff well enough that they can exist beyond just barely getting by.  It's good for church leaders and workers to be economically within the norms of the general culture.  It's good for churches to go beyond minimums and be generous.
It's not the amounts that are as offensive as the sheer audacity of using money as a key tool used to go after leaders the church wants.  It's like the worst stereotype of what goes on in the business world.  I'm embarrassed that all this bolsters the assumption, all other things being equal, we can all be bought, if the price is right.
In the process of hiring anyone, the subject of money will come up.  A person, especially one with a family dependent on their income, will certainly want to discuss salary, insurance, and other financial matters.  I'm not suggesting someone considering a ministry ought never to suggest a higher salary or that a church never offer one.  It is when salary and material benefits serve as the primary attraction.  "I've prayed about this and I think it is God's will," is fatally tainted when it serves to mask greed, even from ourselves.
Banning Prostitution
Here are three things a church should do to ban ministerial prostitution.


And, finally, do not call me and promise to double my salary.  I'm not afraid of having an awkward moment.  I'm afraid I might say, "When do I need to be there?"
Will Rogers once quipped that he didn't understand people's complaints about Washington.  "After all," he explained, "We have the best congress money can buy."
To use money to buy what, after accepting the exchange, will later masquerade as love happens every night in America's cities.  It some places it is even legal.  One of those places ought not to be in the church.

Wow. You hit the nail on the head. I've long been troubled by this, and have even been jotting down notes about it. You said this very well. It pains me when churches do not view the Kingdom as anything larger than themselves.
Thanks.

Good stuff, Tom...and for the most part I agree. The only part that I disagree with is where you say, "Never go after a minister serving at another church who has given no indication he or she is open to the possibility of moving." I think HOW a church goes after that person is extremely important. The example you gave of offering a huge salary to bribe a person away from their current place of service is abhorrent. However, I see nothing wrong with suggesting an opportunity for a leader to consider. In fact, I believe that is exactly how God leads in many situations...I know that's what He did with me.

you make a good point. However, Christian Colleges would still view that approach as unethical in regard to seeking faculty members. A quick personal phone call you could make with a simple "Do you want me to give your name out?" solves the problem.

The practice you mention (which we've all grown used to) leads to the somewhat ironic approach that a church will automatically ignore any resumes they get and decide to only "go after someone who isn't looking." That still smells alot like "shepherd-stealing."

I'm also concerned that historically there have been some excellent preacher/pastors serving in small towns or even rural areas (A.W. Tozer or Barton Stone for example). Today very few gifted pastors remain long in smaller settings - even if their remaining would have resulted in that church having a big impact in that limited-population area.

But, I understand your idea that it's OK to give out names. The main part of the post, as you mentioned, was about enticement rather than contact. Tom

Lucy -
Sadly, I believe you are absolutely correct that women employed full time by churches frequently have dramatically lower salaries. This is true even when the education required and the positions are roughly equal.